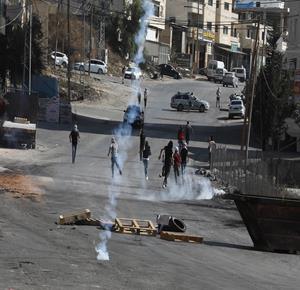 NABLUS, Monday, September 27, 2021 (WAFA) – Palestinian youths confronted early this morning Israeli soldiers and settlers who broke into the northern West Bank city of Nablus and forced them to leave the area, according to Palestinian security sources.

They told WAFA that dozens of settlers entered Nablus under heavy Israeli army protection to perform rituals at what is known as Joseph’s Tomb, near Balata refugee camp.

Palestinian youths confronted the soldiers and the settlers, blocking their road with burnt tires, pelting them with stones, and also shooting at them forcing the army to cut the intrusion short and rush the settlers out of the occupied city.

Israeli reports said two soldiers were apparently wounded in the confrontations while damage was done to army vehicles and buses hauling the settlers.

There were no reports of injuries among the Palestinians despite the army showering them with tear gas and shooting rubber rounds at them.

The Israeli reports said the army tried to convince the settlers to cancel this intrusion due to the tense situation in the West Bank following the Israeli army murder of five Palestinians yesterday near Ramallah and Jenin but the settlers insisted on going into Nablus.

The army had also cancelled a similar event by the settlers near the northern West Bank city of Jenin due to the tension in that area following yesterday’s army murder of two Palestinians from the town of Burqin, near Jenin.