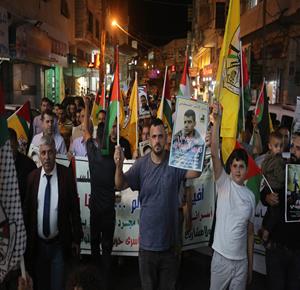 Palestinians raising picture of Zakaria Zubeidi, who was able to break out from Israeli prison along with five other prisoners, during a solidarity march in Dura town, near Hebron. (WAFA Images / Mashhour Wehwah)

JENIN/BETHLEHEM, Saturday, September 11, 2021 (WAFA) – Following reports from last night and this morning that the Israeli occupation forces were able to capture four of the six freedom fighters who escaped from Gilboa prison in northern Israel on Monday after digging a tunnel, protests and clashes with soldiers were reported in various parts in the occupied West Bank, according to sources, In the Jenin district in the north of the West Bank, home of the six prisoners, hundreds of people took to the streets late last night following the reports of the capture of two of the six prisoners in the Nazareth area and went to their homes in a show of solidarity with their families and towns.

In Bethlehem in the south of the West Bank, Palestinians clashed this morning and last night with Israeli soldiers at the northern entrance of the biblical city in protest against the capturing of four of the prisoners as two more were reported caught this morning in the lower Galilee.

The soldiers attacked the protesters with tear gas and sound bombs, said the sources, and one person, a 19-year-old resident of Aida refugee camp north of Bethlehem, was detained by the soldiers. There were no reports of injuries.

In Dheisheh refugee camp, south of Bethlehem, residents took to the streets calling for freedom to all Palestinian prisoners held in Israel for resisting the occupation and holding the Israel government responsible for the lives of the captured prisoners and others.