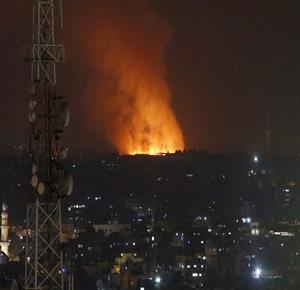 Fikle photo for an Israeli airstrike on Gaza

He said that the Israeli F-16 fighter jets targeted a site to the west of Khan Younius, south of the besieged coastal enclave, a plot of agricultural land, east of Gaza city, the vicinity of al-Shuhada graveyard, east of the Jabalia town, in addition to a site to the east of Shuja'iyya neighborhood.

He added that the airstrikes caused substantial damages in the targeted sites, specifically in the nearby civilian houses and property.

No human casualties were reported, however.

Meanwhile, the Israeli navy opened fire at Palestinian fishing boats offshore al-Sudaniya area, west of Beit Lahia in the northern besieged enclave. No casualties or damages were reported though.