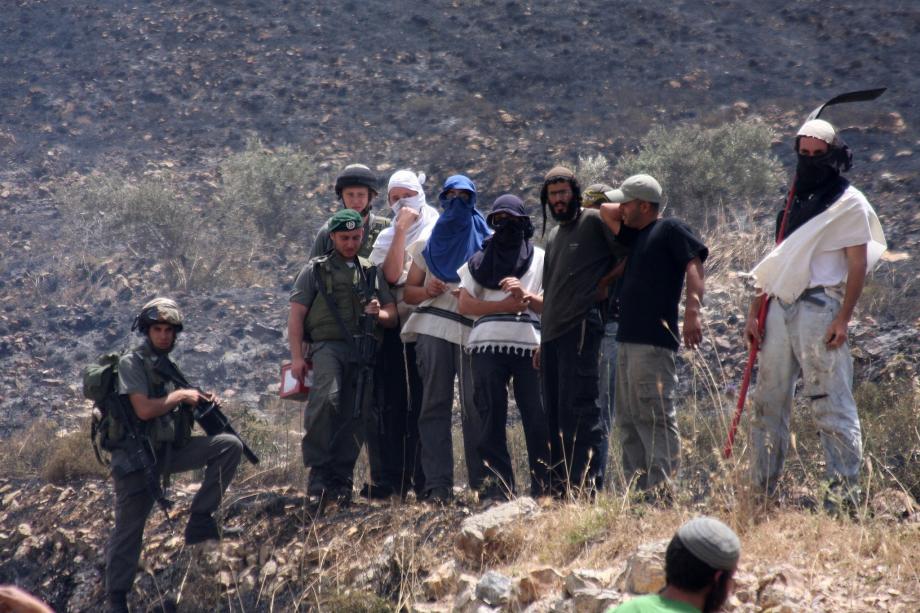 Pictured above is a group of Israeli settlers, under military protection, encroaching on Palestinian farmlands

They confirmed that a group of settlers forced their way into the village, which forms a part of Adh-Dhahiriya town, physically assaulted shepherds and broke into houses in order to terrorize and expel them out of the area to seize their land for colonial settlement expansion.

The village has a total population of some 150, comprising some 30 families, who depend on agriculture, livestock rearing and dairy production for their livelihoods.

Local farmers are the most affected by the Israeli occupation’s practices. Owing to its adjacency to the Green Line, the village has suffered considerably from occupation, particularly due to the construction of the segregation wall. About 200 dunums of village lands were confiscated during the Second Intifada.

The village is surrounded by Israeli colonial settlements of Shima and Tene to the west, and a bypass road runs through the center of the village from west to east. Approximately six kilometers of the apartheid wall have been constructed on the village land since 2004. Five cisterns have been destroyed due to the construction the wall.