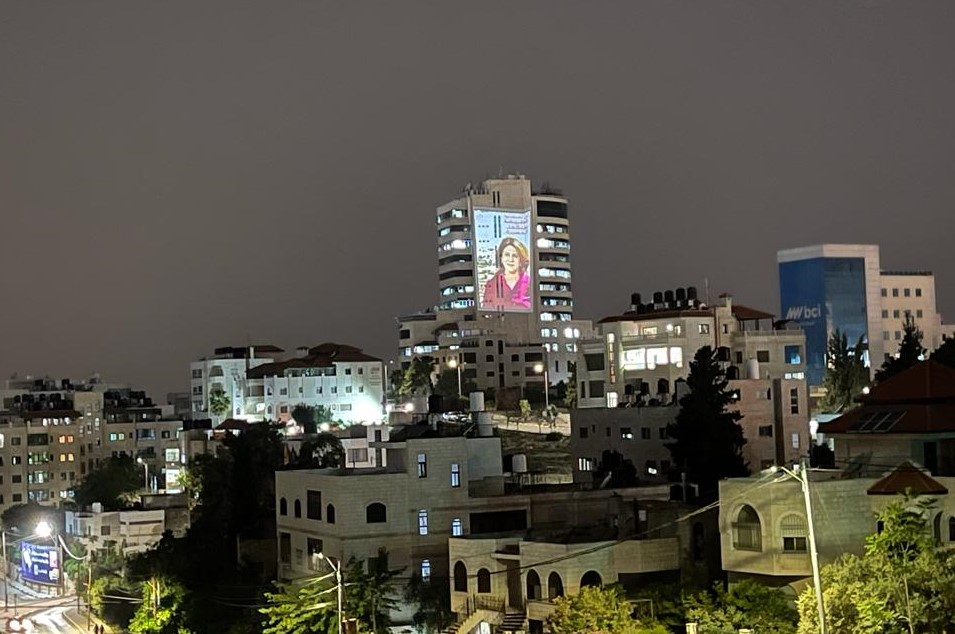 RAMALLAH, Saturday, May 14, 2022 (WAFA) – A big portrait of slain Palestinian journalist Shireen Abu Akleh was lit up today on the Palestine TV tower in Ramallah, in the center of the West Bank, in honor of her memory and achievements.

The lighting up ceremony was attended by Minister Ahmad Assaf, the Chairman of the Palestinian Broadcasting Corporation and General Supervisor of the Official Media, and a handful of PBC officials and local journalists.

Speaking at the ceremony, Assaf said that lighting the Palestine TV tower with the image of Abu Akleh was “an appreciation of her efforts and media role in conveying the Palestinian narrative to the world and documenting the crimes of the Israeli occupation against our people, their land and their holy sites.”

The Palestinian-American journalist was in Jenin on Wednesday early morning reporting on an Israeli army raid when she was killed by Israeli occupation forces, according to multiple witnesses at the scene, who said that there was no confrontation with Palestinians at the time of the shooting.

Wearing a press vest, Abu Akleh was shot in the head by Israeli soldiers during her coverage of the raid and was transferred to Ibn Sina hospital, where she was pronounced dead.

Another journalist, Ali Asmoadi, an Al Jazeera producer, was wounded by a gun shot and is in a stable condition.