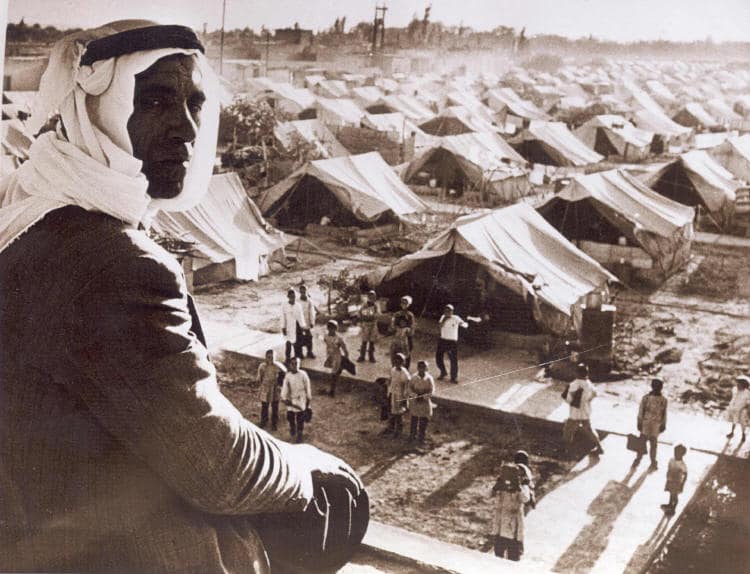 Palestinian refugees were one outcome of the Balfour pledge.

RAMALLAH/LONDON/CAIRO/JADDAH, Tuesday, November 2, 2021 (WAFA) – Marking the 104th anniversary of the infamous Balfour Declaration when British Foreign Secretary at the time, Arthur Balfour, committed the British government to establish in Arab Palestine a national homeland for the Jewish people at the expense of its indigenous Arab population, Palestinians, the Arab League and the Organization of Islamic Cooperation (OIC) reiterated their condemnation of this pledge by a British official branding it as a stain on human consciousness.

Palestinian flags were flown at half-mast today in Palestine and at its missions around the world as decreed by President Mahmoud Abbas to remind the world in general and the United Kingdom in particular of the suffering of the Palestinian people and of their rights to achieve independence, statehood, and self-determination.

In the occupied territories, schools today held special classes on the impact of the Balfour Declaration on the Palestinian people and their future.

“Today marks 104 years since the Balfour declaration. This has been a century of pain for us the Palestinian people but also of resilience and perseverance. It is time for Britain to apologize for its colonial acts and atone: Recognize the State of Palestine and sanction Israel’s transgressions of the law,” tweeted Husam Zomlot, Palestine’s ambassador to the United Kingdom.

The League of Arab States took this occasion to call on the UK to “correct this historic mistake and assume its historical, legal and moral responsibility by apologizing to the Palestinian people, and recognizing the Palestinian state on the June 4, 1967, lines with East Jerusalem as its capital in support of achieving a just, lasting and comprehensive peace in accordance with the vision of a two-state solution.”

The OIC also contributed to this occasion and said in a statement that Balfour’s “pledge provided for the establishment in Palestine of a colonial occupation state with its ongoing policies of mass expulsion, ethnic cleansing, colonial settlement, judaization, land confiscation, property destruction, and denial to the Palestinian people of their legitimate national rights.”

It added, “As the world commemorates this dramatic event in the history of humanity that has left a stain on human consciousness and marked a setback to the values of freedom and justice, the Organization of Islamic Cooperation renews its unfailing commitment to the Palestinian people in their struggle for their legitimate rights.”

It called on the international community “to assume its historical, legal and political responsibility to bring the Israeli occupation to a cessation, and to enable the Palestinian people to recover their inalienable rights, including the right of return and the right to an independent state on the June 1967 borders with east al-Quds as its capital, conducive to the two-state vision embodied in the relevant UN resolutions and the Arab Peace Initiative.”