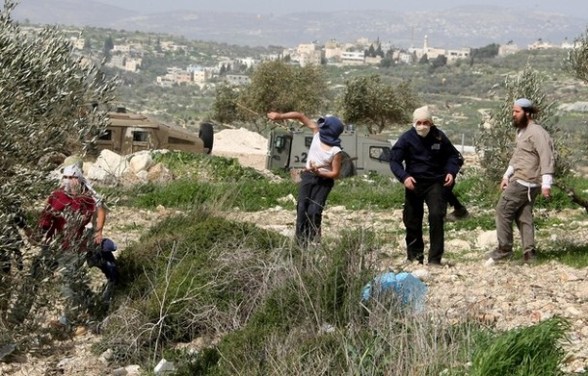 HEBRON, Tuesday, September 28, 2021 (WAFA) – Several Palestinians were injured, including a child, and dozens of others suffocated by tear gas during an Israeli settlers’ attack on several communities and locales in the Masafer Yatta area, south of Hebron, in the southern occupied West Bank, according to WAFA correspondent.

Settlers, under the protection of Israeli army soldiers, broke into several communities in the Masafer Yatta area and started attacking Palestinian residents and their homes, damaging several vehicles and solar panels, destroying crops, and uprooting dozens of trees.

Coordinator of the Anti-Wall and Settlement Committees Rateb al-Jabour said residents fended off the settlers’ attack, which resulted in the injury of several people, including a child who sustained bruises in the head and back. One of the injured was transferred to hospital for medical treatment.

Israeli forces did nothing to stop the settlers and instead joined in on the attack, firing tear gas canisters and stun grenades towards residents and their homes, causing dozens to suffocate.

Two elderly men aged 62 and 75 were detained by the Israeli army during the attacks.

The military repeatedly blocks roads and destroys water supply infrastructure in this area, as part of the authorities’ routine harassment of Palestinian communities in the South Hebron Hills, particularly in Masafer Yatta, in its bid to expel them from their homes and from the area in which they reside, said the Israeli information center for human rights, B’Tselem.