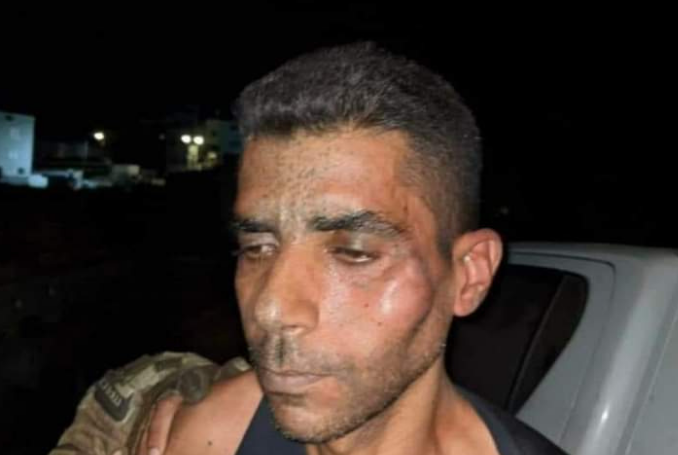 Zakaria Zubeidi after his capture with a swollen face from beating.

RAMALLAH, Wednesday, September 15, 2021 (WAFA) - The Commission for Detainees and Ex-Prisoners Affairs said today that Zakaria Zubeidi, one of four Palestinians who were caught over the weekend after his escape from prison in Israel along with five others last week, was beaten and ill-treated during and after his capture resulting in him suffering from broken jaw and ribs.

It said that one of its lawyers was able to visit Zubeidi in his prison cell this morning after an Israeli court lifted the ban on their visits and was able to check on his situation four days after his capture.

Zubeidi, said the Commission in a statement, was transferred to an Israeli hospital after the arrest due to the beating and was given sedatives. He suffers from bruises and cuts all over his body as a result of beatings and torture.

Zubeidi told his lawyer that he did not take part in digging the escape tunnel in their cell and that he was moved to the cell of the other escapees one day before they broke out from the prison.

He said that during the four days he was out of prison, they did not ask for help from anyone out of concern for the Palestinian people who may suffer from the Israeli reprisal measures and that they did not drink water throughout their short freedom while they ate only fruits they found in the fields, such as cactus, figs, and others.

Two of the prison escapees remain at large.