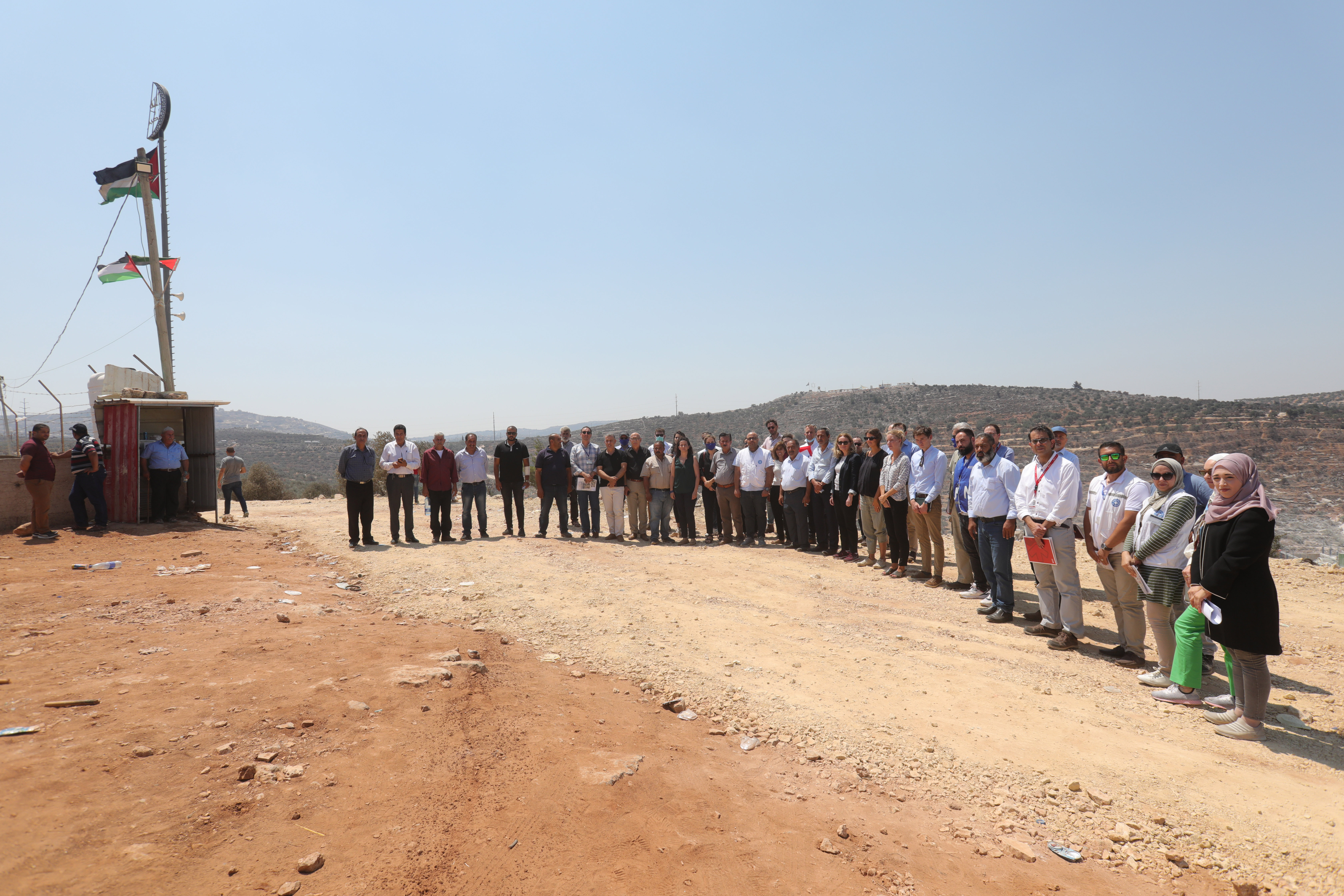 European diplomats on a visit to Beita village.

A statement by the delegation and Ireland said the visit took place in response to increasing concerns – across the West Bank and in Beita in particular – about the rising levels of settler violence and to touch upon the worrying establishment of an illegal settlement outpost on top of Jabal Sabih, on the outskirts of Beita village, which is causing regular clashes between Palestinian residents, Israeli settlers and the Israeli forces that left six Palestinians shot dead by the Israeli forces and hundreds others wounded since the beginning of May.

During the visit, participants heard from local residents, WBPC partners, and the Colonization and Wall Resistance Commission about the developments on the ground, which often result in violent incidents as the residents live in close proximity to a settlement outpost. Palestinian residents told attendees how they feared losing further land and being exposed to more settler violence.

Members of the WBPC and likeminded countries also heard about the lack of effective preventative measures and sufficient protection against the perpetrators of settler violence.

According to the UN Office for the Coordination of Humanitarian Affairs (OCHA), the total number of settler attacks across the West Bank that have resulted in injury and/or property damage in 2021 has increased by 46 percent compared to the same period in 2020.  Meanwhile, Yesh Din, an Israeli human rights organization, reports that 96 percent of investigations by Israeli authorities into acts of settler violence do not lead to the filing of an indictment.

All participants reiterated their continued strong opposition to Israel's settlement policy and actions taken in this context, said the statement. They recalled how Israel, as the occupying power, was obliged to protect the Palestinian population from attack. Under international law, Israel has an obligation to maintain public order in an impartial manner and to protect Palestinians and their property.

Settlers and others who are responsible for crimes against Palestinians must be held accountable, criminal activity must be thoroughly investigated and reports brought to the attention of Israeli authorities by Palestinians followed up on, added the statement. Israel should take all necessary measures to ensure effective prevention and protect Palestinians against violence committed by settlers.

Visiting Beita, British Consul General Diane Corner said: “We condemn any incidence of violence by settlers against Palestinians. We urge the Israeli authorities to address settler violence and to thoroughly investigate every incident to bring those responsible to justice and end the culture of impunity.”

Corner added, “The UK’s position on settlements is clear: They are illegal under international law, present an obstacle to peace, and threaten the physical viability of a two-state solution.”

European Union Representative Sven Kühn von Burgsdorff also stated via his representative: “For months, the people of Beita have been exposed to serious incidents of settler violence and the building of an illegal Israeli outpost on Mount Sabih, which risks capturing up to 30 percent of Beita’s land. These developments have left many families suffering. Several Palestinians lost their lives, including two children. The policy of settlement construction and expansion in occupied Palestinian territory, including in East Jerusalem, is illegal under international law, and Israel must protect the Palestinian population from these violent attacks.”