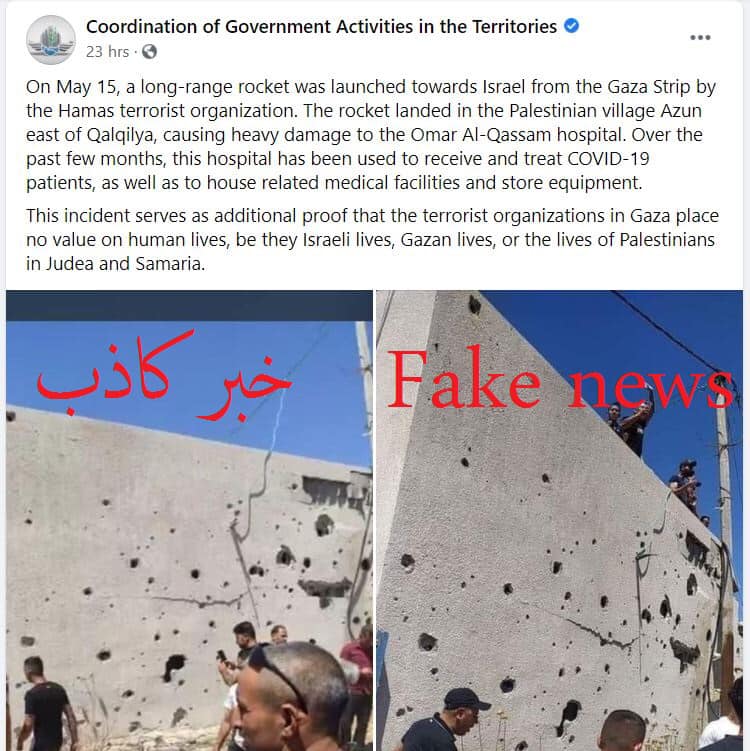 RAMALLAH, Tuesday, May 18, 2021 (WAFA) – The Ministry of Health Monday denounced a COGAT on the targeting of a hospital in the northern West Bank district of Qalqiliya by a Gaza rocket as fake news.

The Ministry of Health (MoH) denied the tweet by the so-called Coordination of the Government Activities in the Territories, a deceptively-named Israeli occupation body, that “on May 15, a long-range rocket launched towards Israel from the Gaza Strip” by Hamas “landed in the Palestinian village of Azun east of Qalqilya, causing heavy damage to the Omar Al-Qassam hospital.”

COGAT used the alleged incident as a proof that Palestinian armed groups in Gaza “place no value on human lives, be they Israeli lives, Gazan lives, or the lives of Palestinians in Judea and Samaria”.

MoH stated in a press release that COGAT’s allegations are part of the “Israeli occupation authorities’ quest to distort reality and mislead international public opinion” through disseminating fake news in English with a photo that was not for the Omar al-Qassam hospital.

It stressed that Israel’s attempt to mislead the international public opinion is intended to “enable it to escape ]responsibility for[ its crimes in the Gaza Strip, involving the killing of entire families and medics, in addition to the bombing hospitals, health centers, MoH building besides to the sole central Covid-19 testing labortatory, which threatens to exacerbate the outbreak of the pandemic in the besieged coastal enclave”.

Israel used the Jewish nationalist name “Judea and Samaria” to refer to the occupied West Bank to reinforce its bogus claims to the territory and to give them a veneer of historical and religious legitimacy.