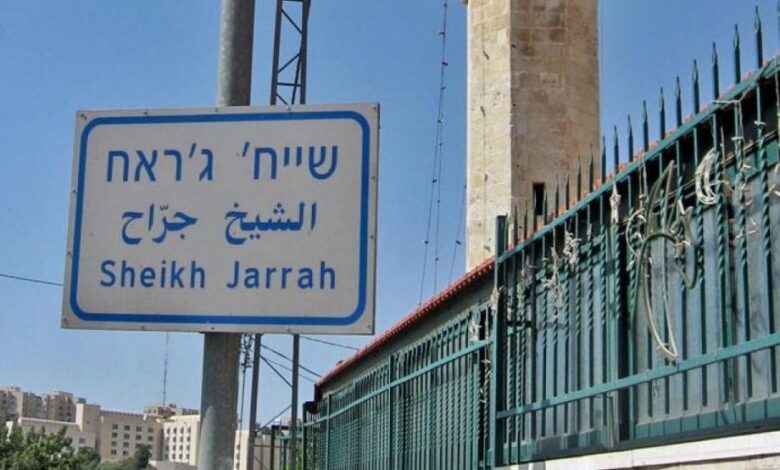 JERUSALEM, Sunday, May 2, 2021 (WAFA) – Israeli occupation forces last night assaulted and dispersed dozens of Palestinian nonviolent protesters while holding a sit-in in the neighborhood of Sheikh Jarrah, in occupied Jerusalem, against an imminent threat of eviction from their homes by the occupation authorities, said witnesses.

Police officers reportedly assaulted the protesters and beat up some of them, and also asked those protesting inside the homes slated for evacuation to leave them.

Currently, at least six out of 28 Palestinian families in Sheikh Jarrah are under the imminent threat of eviction from their homes to make way for a new Israeli settlement known as Shimon HaTsadiq. A plan for the settlement, consisting of 200 housing units on 18 dunums, has already been submitted to the Israeli municipality in Jerusalem.

The Jerusalem District Court has ruled at least six families must vacate their homes in Sheikh Jarrah as of today, despite living there for generations.

The same court ruled seven other families should leave their homes by August 1. In total, 58 people, including 17 children, are set to be forcibly displaced to make way for Israeli settlers.

The court rulings are a culmination of a decades-long struggle for these Palestinians to stay in their homes. In 1972, several Jewish settler organizations filed a lawsuit against the Palestinian families living in Sheikh Jarrah, alleging the land originally belonged to Jews.

These groups, mostly funded by donors from the United States, have waged a relentless battle that resulted in the displacement of 43 Palestinians in 2002, as well as the Hanoun and Ghawi families in 2008 and the Shamasneh family in 2017.