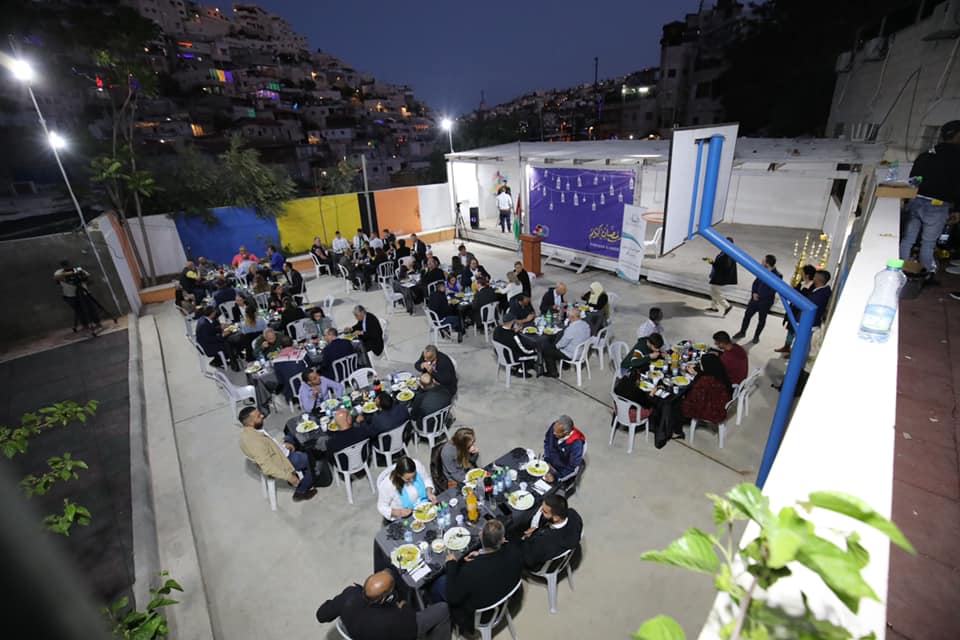 EU diplomats sharing an end of fast Iftar meal in Silwan few days ago. (Photo courtesy of the EU)

JERUSALEM, Tuesday, April 27, 2021 (WAFA) - Following the recent unrest and violent clashes in occupied Jerusalem, European Union Heads of Cooperation in Jerusalem and Ramallah today visited several neighborhoods in East Jerusalem where they were briefed by EU partners and Palestinian counterparts.

The delegation met with Palestinian families facing evictions and demolitions in East Jerusalem, students and teachers at schools in the old city, and owners of small businesses benefiting from EU support.

This visit confirms the solid commitment of Team Europe members towards the Palestinians in East Jerusalem and sends a message of hope and support amidst an increasingly tense reality for Palestinians in their city, said an EU press release.

Today’s visit of the European Union Heads of Cooperation in Jerusalem and Ramallah provided the opportunity to take stock of existing projects, meet with beneficiaries, and learn about the current challenges, particularly against the backdrop of the Covid-19 pandemic and the most recent political developments, it added.

In Isawiyya neighborhood, the delegation met a Palestinian family facing imminent threat of home demolition and another family split due to the rejection of a residency request.

The European Union, in cooperation with the Jerusalem Legal Aid and Human Rights Center (JLAC), is supporting both marginalized communities and individual cases. Putting both cases back in the bigger picture, JLAC presented its study on Isawiyya “Accounts of Persistent Isolation, Separation and Violations”, and explained the threats targeting Palestinian Jerusalemites as a result of the Isawiyya “masterplan” prepared by the Israeli authorities.

The Heads of Cooperation visited two schools in the Old City, where they discussed the current situation of the education sector in East Jerusalem.  The group was briefed about on-going work in renovating old school buildings, aiming to enhance the resilience of East Jerusalem schools such as the al-Wifaq School. In addition, they discussed with experts the distance learning challenges and its impact on inclusive education.

The last stop was meeting the Palestine for Development Foundation (PSDF) team.  The delegation was briefed on the COVID-19 pandemic impact on micro, small, medium enterprises (MSMEs) and the private sector in East Jerusalem.

PSDF, then, presented the grant facility for private sector development in Jerusalem and its impact on strengthening MSMEs. This facility improved MSMEs skills and professionalism, their business model and thus their commercial activity.

Since 2018, 49 businesses have received investment grants. More than 410 jobs were created or sustained through this project. Despite the fragility of the private sector in East Jerusalem, the facility aims to provide investment grants for at least 50 businesses by the end of August 2021.

Through the East Jerusalem Program (EJP), the EU is providing around 12 million Euro annually to support the Palestinian in East Jerusalem. This program aims at maintaining the two-States solution with Jerusalem being the capital of the two States and supporting the Palestinian resilience and cultural identity of the City. Aid is primarily channeled through direct awards (grants) to NGOs, or through contribution agreements with UN bodies and/or EU member States.