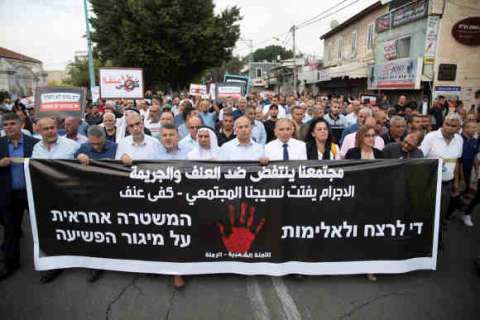 Palestinians in Israel demonstrating against rise in crime in their communities and police apathy. (File photo)

NAZARETH, Saturday, April 10, 2021 (WAFA) – Three people were killed in two Arab towns inside Israel last night, raising the toll of deaths resulting from a rise in violence in the Arab towns to 25 since the start of the year, and amidst obvious police apathy.

Sources said unknown assailants opened fire at people inside a food kiosk in Deir al-Assad town in the north of Israel, fatally killing two and injuring two others reported in moderate and light condition.

In the Bedouin town of Ibtin, also in the north of Israel, a young man was shot and killed and his brother injured when assailants broke into their home and opened fire at them.