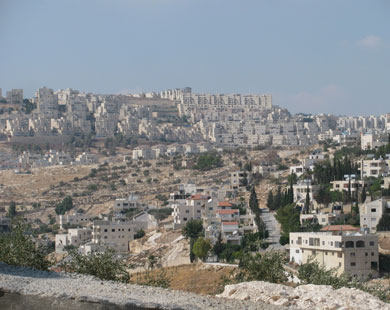 The illegal Har Homa settlement expanding at the expense of Palestinian land.

"This decision is condemned and rejected," said presidential spokesman Nabil Abu Rudeineh in a statement. "It violates all United Nations resolutions that condemn settlements, especially Resolution 2334 which affirmed that all forms of settlements on Palestinian lands are illegal."

Abu Rudeineh said that this decision is a defiance of the international community, specifically the new US administration and the International Criminal Court.

"The occupying government is trying, through continued settlement expansion and the seizure of Palestinian land, to create facts on the ground and prevent the establishment of a contiguous Palestinian state with Jerusalem as its capital," said the official spokesman.

"If the international community, and specifically the International Quartet, as it declared, wants to preserve the two-state solution in order to achieve peace and stability in the region, then they must pressure the Israeli government to stop its settlement activities and contempt for the United Nations resolutions," added Abu Rudeineh.

In a telephone call with President Abbas, German Chancellor supports holding Palestinian elections including in Jerusalem